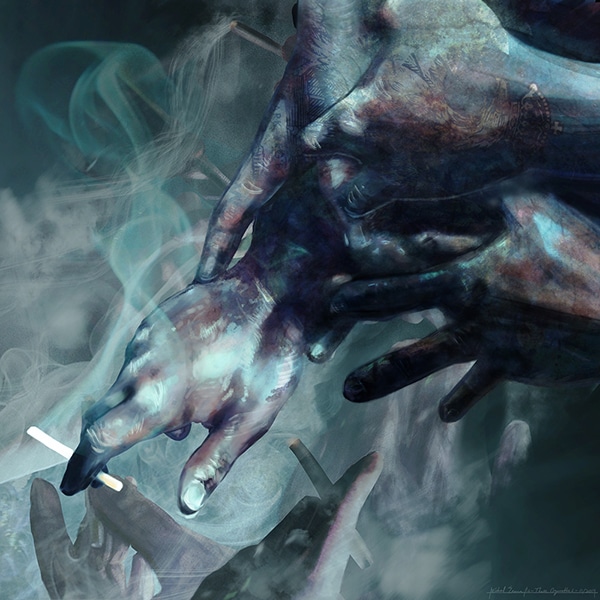 I observed the overshadowed part of his face. The light side was rather childish, but the overshadowed part looked firm and older. The snow-white, pearly-milk teeth between his meaty lips and cheeks looked like a little child’s teeth, but they had changed into the yellow, ragged teeth of a porter who had to carry the stuff of gentle women under downpour and overused tobacco under pressure. The one who saw the flesh beneath his cheekbones emaciated in the dark and his sunken cheeks memorized weariness would be hurt. Fortunately, he freed his face from the shadow and turned towards – me – the light.

“I’m waiting for the bus to Sarıyer. Is this the right place to wait?” he asked. His nasally voice fit well with  his facial complexion. I couldn’t tell how old he was. He put his chilblained hands in his pockets.

“No,” I said, “the bus to Sarıyer passes from the backstreet.”

He kicked against the air. He was about to swear, I noticed, but he didn’t.

The bossiness in his voice was strange when he said, “Give me a cigarette.” But I liked that he knew without a doubt that I had cigarettes. I took a cigarette from my bag, gave it to him. Putting the cigarette between his lips, he stared at me with the look of a drunk man looking at the tavern keeper to top up his glass.

I lit it up, approaching it to his lips, but he moved away. He took the lighter, lit the cigarette himself, and gave me the warmed lighter back.

“I’ve waited all this time in vain,” he said. He stretched his feet, bent his back, and his short jacket moved up. His flat tummy shined with the light coming from the hotel further. It felt strange that he stood still, though he learned where the bus passed. If he lost time, why didn’t he quickly go to the backstreet?

The way he smoked contrasted with his childish appearance; the ones who saw him might have thought he spent most of his time in the smokiest coffee houses for many years. The childlike features were on his face, but the other parts of his body were very much adult. I wanted to take his face and put it on another body that was drowsy under the sun and sparkled.

The smoke was exhaled from his lungs.

“Where are you going, sis?” he asked. I got angry, wanted to say, mind your own business, but I didn’t.

The little roughneck went too far. I withdrew from my friendly demeanor and spoke more harshly.

Taking a step back, he put his right hand on his left breast. “Don’t get mad at me, sis,” he said, “I’m just saying.”

“Weigh your words and then speak.” I looked away.

Though I didn’t directly look at him, I saw he was walking back and forth. He threw the cigarette butt, the way he crushed it made him look like an old woman braying garlic with the anger of waiting for his sexagenarian husband hooked on the gambling table. I stared at his shoes. Cheap brown stout leather shoes seemed three sizes bigger for his feet. However, it was obvious the stout leather shoes with slightly upright toes helped him preserve his youngster image.

But why didn’t he leave me and go to the bus stop?

I had been waiting for the bus for twenty minutes. I was tired. My feet hurt because of standing up on high heels all day long. If the ground wasn’t cold, I would sit on the stairs and save my feet from the pressure they were exposed to, but it was unseemly cold for April.

I was annoyed the bus didn’t come. I turned to him as if I wanted to wreak my anger on the child-man.

“Why don’t you go?” I squealed. “I told you, the bus passes from the backstreet.”

He shrugged. When he bent his neck, I saw the scar of a knife wound beneath his ear scar in the shape of a line on his flesh. He caught me looking and his eyes said, do not even ask.

“Do you begrudge me a cigarette, sis?”

I consoled myself, thinking there were other people at the bus stop besides me and took a cigarette from my bag with sudden nervousness. It could be unpredictable what people like him would do. Showing off puberty and machismo with elegant clothes, they would grab your bag in a minute. After all, it was the time of handsome, elegant thieves. It would be even more woeful if the bag would be stuck on your arm. The silvery back of the jackknife would shine either under the sun or in the dark.

I smiled as sharp as a knife in return. He felt my nervousness.

“Good heavens! Why would I be scared?” I murmured.

He looked at me, I saw the happiness of a child who was gifted an electric train on his face. His face was in limbo, but it turned into a man in a minute. His happiness turned into desire, his eyes shined.

“May God bestow you to your owner.”

I shouted inside, what owner, but I hid my nervousness. I insensibly said Amen for form’s sake. Pulling the tail of his jacket back, he held his waist.

He lamented, “Oh, if only I were that jerk, I wouldn’t let you out alone at this time of night.”

“Who is the jerk? What the hell are you saying?!”

“I meant the asshole, your beloved or your husband, whatever he is.”

“No man, there’s no beloved or husband!”

I got nervous, I couldn’t say anything. I wished I could slap his face with my ringed hands, tear his skin apart, and leave a trace on his cheek as well… I couldn’t. I turned my cheek to the child-man as if I lost control. He held my head with both hands and smotheringly kissed my cheek. I was choked up with the stench of the cigarette from his mouth, but some time later, I smelled the caramel rising from his saliva when my lips touched his milk teeth.

He moved his lips away from mine and looked at my thirty-five-year-old face with his five-year-old face. Holding his nearly unfinished cigarette between his milk teeth, he hopped on his stout leather shoes with slightly upright toes and walked away with the manner of John Travolta and disappeared.

The bus to Yeşilköy gathered its passengers from the bus stop and turned off its stop lights. It was going away at a fast pace as if it rushed to carry the passengers to their homes after saving them from the rain that just started.