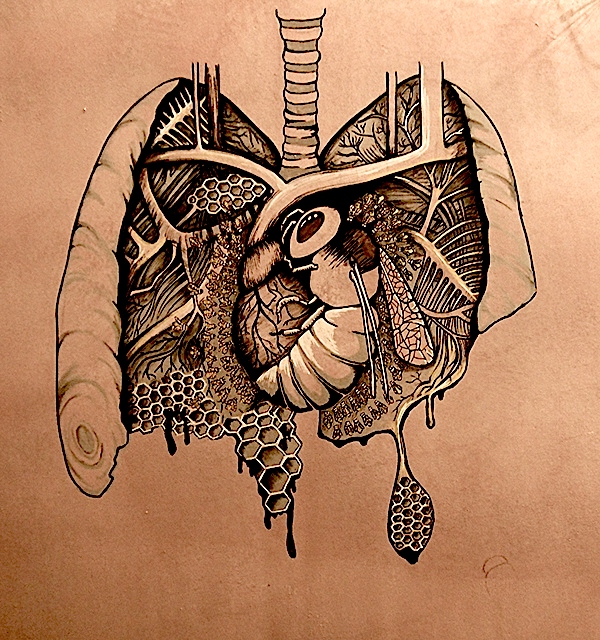 Wind swept through freshly cut herbs and sunburnt people rode horses, pulling rakes to collect them. The sky was at its bluest because of the heat. Elevated dust and dirt swirled in mid-air, like yellow spit, and embraced a pink of some sorts where it almost landed back on the ground. Bales kept piling up; the crops that turned into scabs waiting to be lifted off fell from rakes, in circles. What was taken from the soil gathered in the roots of eyelashes and hair of people, turned into dark lines under their nails. A drop of water was sacred when the sun shone at its highest point. Loose-bellied horses were waiting for the work season to end, for the times when they could run in herds, run wherever they fancied during winter. Maybe the dream of this made them continuously pull the rakes, calmly submit to the leather whip…

She walked past the fields and reached the hives, artificial white and blue boxes lined up together. How many were there? Forty, fifty? Bees buzzing above made her slightly nervous. She quickened her steps towards the white triangular tent ahead. She called in, waited for an answer… She heard nothing but continuous buzzing. She felt the urge to shove her hand in a hive, grab a comb and flee. This scenario made her giggle. Girl, you’d be bitten a million times… She’d been driving on this road and the view on either side of it calmed her; how peaceful the people here seemed, the children, the cranky-looking elderly… There was no sound but the whooshing grass.

This decision she made, she was questioning it at all times, like an inner discomfort poking her every second. Her coherent consciousness monologues at one side, and anger-filled grunge tunes of her imagination at the other, she felt an overheated stone growing inside. She had left the corporate vibes and concrete walls and filthy alleys of the city, she had, but why hadn’t she gone to a forest where morning dew sparkled on leaves and instead had travelled through the yellow steppes of Anatolia, followed the path of hot seeds, and ended up in Kars? As she drove past the roads, as forest turned greener, she had focused more on the barren lands showing ahead and realized that everything had a more specific, special meaning than what she assumed. She had poured the pieces of her personality, or who she aimed to be for years, and gave up after thinking she managed to be, but failed. Was it a coincidence that she ended up here on her quest to find her new home town? She did have courage, when closing the doors on her life that others envied, but where was that courage now? Where had this sad soundtrack come from? The grounds for her decision, which she thought as unquestionable, were quivering. There’s always a way back, she thought. The doors of that big, filthy city are always open.

She saw an old man and his horse pulling a rake behind it. She looked at him, in the way you look at strangers. If she didn’t though, if she got off her primitive ride and asked him how he was, the old man would be so thrilled. Her will was growing weak, the idea of taking her bags from the hotel, going to the airport, getting on the first flight to the city, eating tiny sandwiches and drinking tomato juice in the plane. What you knew, what you were used to, was so easy. Acts that turned mechanical, so soothing.

Up ahead, behind a pile of turf, she saw another hive field. She called to the man fatigued by the sun, “Do you have any honey?”

A woman from the city asking for honey at mid-day wasn’t unusual at all for the man. He shook his head no. He told her that the honey was too liquid, and that he wouldn’t sell until it became thicker, which would happen in about two months. So she walked backwards, and the flies hovering over the turf intrigued her. As she approached to touch the black mass she thought that she could figure out her fears right there and then. Her mind kept telling her that this realm surrounding her couldn’t possibly be real, and that she couldn’t settle her soul in these lands she’d been longing for. She neither belonged to the steppes nor to the forests of this country; the city had pierced her nose, and it had been dragging her all along. Because of this she was escaping, and this escape couldn’t end in a beaten journey back. She had to prove she belonged, to herself and to nature. This truth was now extremely visible as the turf crumbled in her hand, her worries and troubles were being soothed. Grazing horses, gauze cloths wrapped around the heads of young people, families working the fields, the air dusting and swirling around, all elements of this place were slowly finding their spot in the mystery she was about to solve.

She ran to the hives. She pushed the lid of a blue one and dipped her hand inside, her fingers scraping the warm, sticky surface of a comb. She quickly took her hand out and hid her fingers covered in honey inside her palm. She didn’t care the slightest about the man staring behind her in shock and ran as fast as she could to the opposite direction of her car. She resisted the pain in her back telling her to stop, she ran until she felt something stuck in her throat and she began coughing it out.

Her breath was taken away when she saw what she could do with a little self-provocation. She stood upright in the middle of the barren lands that would define her fate. Here, the soil had stones in every size and wasn’t cultivable. There wasn’t a single living being here, other than a horse biting the chains that held it tied to a short pole. As she tried to catch her breath, her eyes met with the horse’s.

In that moment she spit on the ground, the heavy instances she kept inside: all her identities and versions of herself that she could or couldn’t put on, the serious faces she made when she waited for the bus, the attitudes that presented her as “having fun” at crowded dinner tables, the horror she felt at times when she deliberately lied, the sadness she fit in her afternoons, the people whose lives she pretended to envy, the meaningless conversations she had during long luncheons over the years chasing an interest for herself, the compliments she carelessly threw around thinking one day they would benefit her, and pathetic orgasms she faked…

Maybe this epiphany wouldn’t lead to anything miraculous; children would continue to be shot, women would still be stabbed in several parts of their bodies, cruel men would reap the sky, missiles would explode on faces, and laughter would echo over the tables of the ones whose stomachs were already full. But she had found a rupture, at the direction pointed by the ears of this horse, she felt that she could unzip and take her pretend self off her bones, like a satin dress that caressed her body as she got out of it. She was going to get rid of her skin and flesh and hair and give her remains to the soil. Her consciousness was dripping out of her ears in a more liquid form than the honey she held in her palm. She began taking her clothes with her free hand in this crazed ceremony of belonging, self-justification, and approval. It was as if she were breathing out fire, but the horse was calmly watching the mania coming out from the underground and finding its way into a human body to erupt into the earth. The animal stood still, holding its breath under its ribs that looked like they were about to rip out of the skin covering them. She took off her underwear and reached for the pole hammered down into the ground. When she understood that taking it out wasn’t possible for one hand, she focused on untying the chains wrapped around the pole. She leaned close to the soil and bit the weakest link at the bottom, took strength from the ground and opened the metallic circle, both dirt and blood filling her mouth and pouring down her chin in thin streams. Now free, the horse took a step forward.

Only it didn’t, the animal bent its knees, sat, and turned on its back and began scratching itself on the soil. She was mesmerized by its legs kicking the air and its jaw wide open with happiness. Now upside down, this was surely a stud. She lay next to it to find the coherence that stemmed from belonging, began moving around. Stones were penetrating her body, and her spine branched inwards into the soil. She lifted her legs and kicked the air. When she saw that it was gradually getting darker, two thoughts occurred in her mind: that the eyes of the horse had a white shine inside them and that if she were to surrender to nature this shine wouldn’t ever vanish. She was going to stand up in this barren land as the wind that swooshed the grains brought various aromas with it. She was then going to know. All the signs were there for those who truly sought to find and understand them.

She finally opened her palm and licked the sticky liquid. This extract was a combination of tastes, of villages with only twenty households and wasn’t merely an oil painting, of coffins buried in soil with stones in it, of every single cultivated grain, of the tea – even to this day – brewed on wood-burning stoves, of dreams of freedom hammered down to the ground with a spike.

She reached towards the nose of the horse with her wet palm.

The world was naked, so was the heart, and very much so was the human, as long as the mind left the equation.