A Story of Bullying: Chubbies, Faggots, and Whores not Allowed 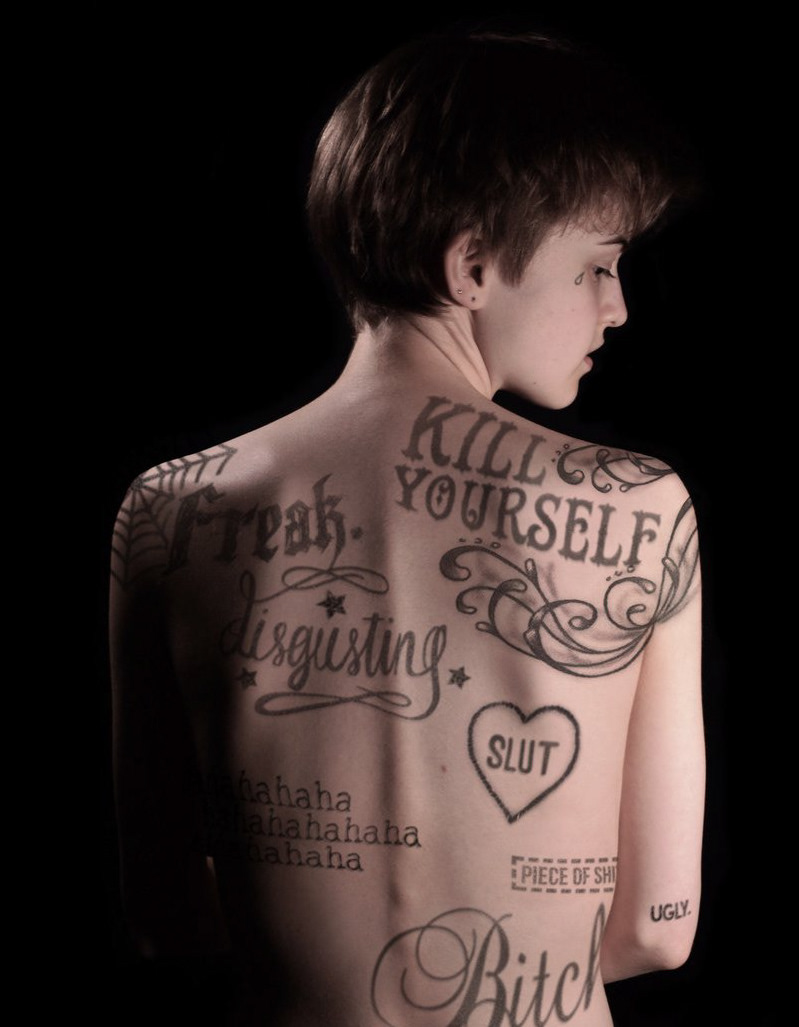 Each experience is one and only. Each bullying is one and only, as well. I went through many traumas and experienced bullying during secondary school, as well as high school. They pushed me towards the phenomenon of death and I spent my days in fear from the age of thirteen to eighteen. I confronted them and got even. I mostly overcame and erased some of them from my memory. Now I’m turning thirty-five and something prompted me to write this. An acquaintance friended me on social media, who was the reason for the nightmarish years I spent, being the direct target of his bullying. We spent our childhood and early youth together. I was shocked to see him out of nowhere because I’ve always been thinking of the systematic bullying he and his friends practiced. I couldn’t stand it. Thinking “the space where our fight against evil and hardships in life starts in our bodies, and we try to exist with our bodies in the spatial emptiness made of ink,” I want to keep writing this through a self observation from where I am – let me overcome the rest of the confrontations with you. This act of writing only includes the experiences of me and my friends.

Since I was three or four – it is the earliest I can remember – my relationship with my body has been both sincere and hostile. I’ve never been a weak bag of bones child with an eating disorder. I’ve never upset my mom about eating. I’ve always been a bit chubby and a bit cute because of the shape of my cheeks. I didn’t care until I was a teenager.

Meeting the external world kicks off a child’s self-investigation, but everything already happens within the domestic hell until that moment. The earlier someone identifies the child, child’s body, personality and stance; the faster the child grows. Self-confidence takes shape and burdens are shouldered for a lifetime during growth.

The most significant moment my self-confidence took shape is related to people I was forced to be friends with after moving from Yalova to Istanbul following the earthquake in 1999, when I was thirteen. I said forced to because I grew up in a small city, then I found myself in the middle of Istanbul’s culture. There was no other choice. When we became neighbors with my father’s friends and their children, I had to be on intimate terms with them. So I was sent to the same school, got on the same school bus, and studied with them. Keeping with the tradition of Anatolian high schools, I spent seven years with them. The only thing left of the seven years is physical anomaly.

At first, I couldn’t comprehend the things happening to me. I started menstruating, my chest and bones were aching. I knew I was growing, but I didn’t know what I would be dealing with. So I allowed others to comment on each of my aching parts. Probably desiring to be approved and appreciated, I made myself their target. They started shooting. They regarded my eating disorder as a fault before I comprehended my trauma after the earthquake.

My friends, they were two boys. We were together in class and at each other’s homes. We secretly smoked cigarettes after coming back from school and changing clothes. We were rather close. Do close friends do that to each other?

“When you come walking this way,” one of them said, “it’s like a huge wheel is rolling.”

“You ate them all, didn’t you?” the other answered. “You cannot lose weight if you eat like that.”

Another said, “Lose weight, mate! You’ll be fine if you lose weight!”

Creating a vicious cycle of talking about me and my weight every time we met, my friends carried these talks to school. Being the subject of bitter jokes about my hips or breasts cast a thin cloud over me. Nobody cared about my talents, my success at school, or my problems. I could never comfortably eat near them. So I made chubby friends, with whom I shared my food and I could be myself. On the other hand, to be on good terms with those others, I learned mocking myself and tried to prove I was never broken.

Does it sound miserable? It was. It got worse.

The wounds these boys made on my body deepened when I could never bare my heart to the person I liked. Let us speak of how I was disgraced before the person I liked in another writing, but it was a fact that I was chubby, ugly, I couldn’t wear what I wanted, I was not desired, I could only be friends with boys, couldn’t be a girlfriend, nobody liked me, I didn’t have a slim waist or could wear short skirts. I was a nerd always reading thick books in the classroom. Until the end of high school, the tasks assigned to Nazlı Karabıyıkoğlu were studying, reading books, being a good friend, listening to everyone, wisely advising people after learning from the books, being nobody, being undesired and unlisted, unloving and diffident, talking about Dostoevsky while adjusting her glasses on her nose.

Meanwhile, I tried to comprehend things happening around me. I was recording everything I saw without being informed about feminism or any other discipline. For instance, there was a girl named G. in the class. She was a whore. She hung out with S., who was a slut, because they were both flirty. They dated everyone who asked them out. G., S., A., and C. teamed up – it was totally a ‘Mean Girls’ team – and it was dangerous. They broke boys’ hearts. Whores and sluts were the girls with beautiful bodies and no purpose in life. Boys said this. They used to ask me about the ways of hooking up with these girls.

There was another S. in the class. His beard grew later than the others’. He laughed away the questions like “Are you beardless, mate?” Then he was identified as a faggot. Soon he became the only gay at the school because he was always around girls. Every time he passed by, they started singing Mustafa Sandal’s song with the lyrics “there’s a ball between us” [translator’s note: “ball”, being round and not definite like square or triangle, thus ‘ambiguous’, has the same meaning as “faggot” in Turkish slang, so the lyrics come to have a meaning like “there’s a faggot between us”].

Being chubby, gay, disabled – the ones with speech disorder experienced many things too – ugly, and misfit, we formed our own clubs. We talked, lied, and consoled each other, but we never found peace. Our self-confidence was broken each day we couldn’t get approval from the beautiful ones. After many years we would understand that we had been the victims of everlasting, systematic bullying; and that is, if we could understand – I wonder whether the others understood as well–, if we had the opportunity to read feminist articles, queer books, and learn body positivity.

Now as I look back, at first I was offended, then I gave up. With which discourse could I stand against them? Which theory, thought, or offense could I tell about? I didn’t know anything either. The only thing I knew was being chubby, faggot, gay, slut, or whore was not bad. Because all friends I liked the most were whores and faggots.

Was it bad? Were those things unwelcomed? Was there a fault in identifying our existence? Did the attempt of befriending the bullies show our weakness?

After graduating from the university, he was the first to get married. He married the girl of whom his mom approved, his third girlfriend.

Thus, he completed all norms of being heterosexual. He soon had a child.

I looked at the profile page of my so-called friend. Was I relieved? Not going to lie, I was relieved. He got bald, gained a lot of weight, became chubby, and married a woman opposite of what he described.

Then I looked at my other friend – and I heard things about him too. He was an idle fellow obsessed with religion, he became devoutly religious, had psychological problems, and didn’t even have anyone in his life – he didn’t, that’s confirmed.

Then I looked at my chubby, whore, slut, gay, faggot friends. I saw each one fulfilled themselves I read about the things they did  in Germany, in the United States, or somewhere else (It doesn’t really matter where they did those things, but I realized that they had a broad vision, which I wanted to emphasize). I looked at their pictures, how beautiful they were!

Is this called karma? I don’t know. I spread my nightmare as an atlas before me after nearly twenty years. I also take a look at myself. Have I lost weight? Yes, I have. Will I gain weight again? I will, if I want to. I realize that I’ve never lost my appetite for flavors, nor for life. How young and how beautiful I am.

How young and how beautiful we are.

It has taken nearly thirty years to make peace with my body. I skip from the time when I was three to present time. What has changed? My physical structure is the same. I was born into a particular DNA. I cannot change the angle of my bones, the tightness of my flesh, or the structure of my body. I’ve read, learned, opened new doors for myself and became a window for others, I’ve made everything meaningful. I’ve identified bullying. I’ve felt sorry when I’ve categorized everything, but I’ve understood. I’ve started building a new self all over again. I’ve enjoyed realizing and fixing my faults.

So, have I forgiven them?

For now, I’m far from the answer. I feel neither sad nor pissed off. I do not – really – enjoy being in a better position by comparing – yes, I compare – our present situations. It is hard to forgive. Confession is hard for someone who has been exposed to bullying each day for almost seven years.

I know what happened and with whom. I know the ones who couldn’t bare feelings to whom, couldn’t wear, eat and hide, tried to be someone else, didn’t study, and drank and fought instead.

Boys – the cis-hetero, mama’s boys – victimized us all to build and test their masculinity.

Masculinity vandalized the assigned and social gender, the vandalism was added to each of our traumas. We changed, defeated, laughed away.

The bullies grew older. Instead of mocking the weight of someone or mocking a whore and ruining lives, now they kill dogs and cats, commit murders, practice mobbing on their employees, and contribute to domestic violence. Even if they don’t, they cause the spread of bullying by raising their children like themselves. Do children really mimic whatever they see at home? Our bullies burn and kill many people after having sex finding them too whorish, like Hande Kader. They cheat on their wives. Then, they unhappily move on with their lives, thinking whether they deserve it or not.

Each person who has seen and recognized bullying, experienced and been tested with it, and moved on is a protagonist. Each novel is one and only, unique. It reinforces its uniqueness through its protagonist.

You’ve written your novels, keep on writing. Do not let their children be like them.