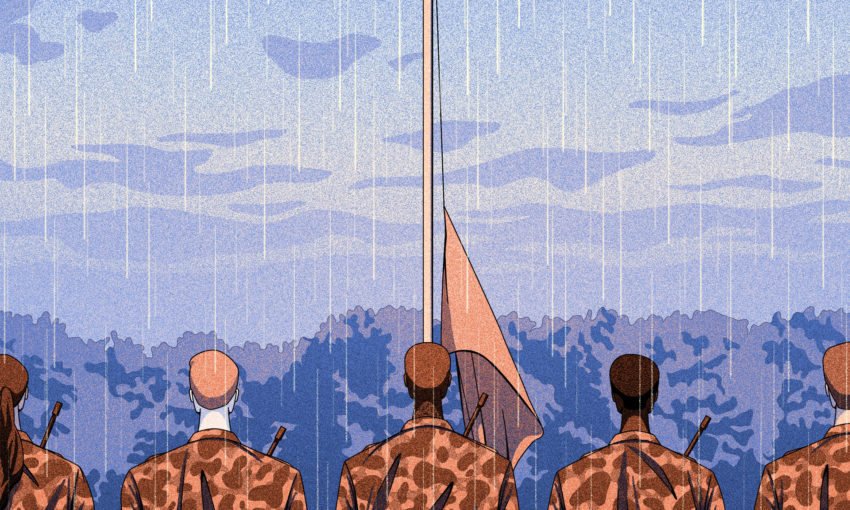 To the victims of Iraq War

A shadow, leaves the sand. A shadow, elongates within the sand. Her toes grip the miniscule stones, bubbles cover her ankles. Kids have already gone, what they left behind along the beach are some half-demolished castles and the cave mazes in them. The island welcomes the children, and banishes the ferries. She crosses her legs on the blue tartan tablecloth and sits up straight. The carries brings seaweed smell from the sea, and various tree essences all mixed in together from the hills of the island.

It’s been a while since she checked in to a local guest house. She likes it when her days start off with kalimeras. She navigates through the map that sea salt draws on her skin. She’s now accustomed to climb the hills, watch the bays from above, and run back to the sea. She loves it when the harsh wind blows on her face, spreading her eyelashes apart, and when it slows down into a breeze and licks away the sands clung on her legs. She falls for the island even more because she can find her way without getting lost. The place is a resort for her spontaneous escape that she herself cannot fully comprehend. With every ferry leaving the island, she rejoices. She plans to spend the winter there, and befriend the default locals. She watches the waves. Before, she would want those waves to swallow her. Now, she is settled. Her eagerness to hurt herself is gone. She categorized her extremes, in a linear order. She now avoids the most intense ones, and tries to smile more often. Her wish to die trickled away, turned into harmless escapes. Loneliness is now her warden. Her tongue is tied, it can’t move. Before. She used to be the last one standing in bar on a night-out. The persistent customer. The women she drew had curvy noses, that feminine line of beauty was always as curvy as possible. If she began to smoke once, she would finish the whole pack, to watch the smoke elevate if not the actually inhale. She used to put herself away and wouldn’t talk to anyone for days when she found the chance to be alone. She used to spend noon out on hot days, try to take the most she could from summer. She would walk in zigzags, try to take the most she could from the road. As she waited for someone to return from the desert, she used to sit on sand and tie the days to months. She used to be able to like ivies , soil, latex gloves, lighters run out of gas, mouthy women, over-priced restaurants, twice-sold tickets, delayed buses, dried-out pens, old toilets, broken nails, plastic flowers, people who only talks about themselves, switched off fans on a hot day, the lung-burning smell of a full ashtray, wobbly bellies, and even escalators. But she just couldn’t like the desert.

She feels someone standing behind her, but she doesn’t turn around and look. A man walks by her and in the sea. He walks until the water touches his knees, then turns around and glances across the beach. He turns back again, towards the horizon and buries himself in the water where it touches his back.

The shadow of the man’s disappearing body rests in her vision. She tries to foresee his next move, and the man starts diving in and coming out as agile as a dolphin. The urge to stare at his shoulders rises, but her fear from the inappropriate weighs more, and she locks her eyes at the horizon.

She doesn’t think she’s fine on her own either, nor she wraps her sunkissed arms around her body.

When the man disappears in the blue, she reaches to her bag and takes out her camera. For a long time, she takes pictures of the dried sand on her feet. Then she captures her face, the split ends of her hair, blond hairs on her legs, all of her limbs, one by one. As she is about the put down the camera, she notices the shadow in the blue. She starts to photograph the head and the wide chest that keeps surging and diving. The man steps on the shore and she hides the camera, afraid of getting caught. He sits on the rocks, his feet and legs stay in touch with the sea.

as he sits on rocks,

as he leaks, pitch black tar,

a dark circle around him, enlarging.

The seagulls will die, she says to herself. The way the man anchors himself to the beach, he will empty the sea and the tree trunks around the island, seashells will all crumble and turn into dust and fill human mouths and throats to death. He moves a little, and she sees the tattoo on his back. Partially grayed but black letters makes her gasp for air for a second. “Swf ydr alshra’ abtla’e – Desert will devour you too” Reeking mold surrounds her, a smell worse than the the man’s mossy back. She tries to move her hair away from her face, using the bacon colored limbs coming out of her two elbows.

She… She felt shame when her hands were on fire, so there they stayed, sizzling.  But she chose not to be smothered by the waves, not to die off, because the man she sent one piece came back a thousand tiny pieces, for him. She loaded everything she had on that convoy, set out  to plunder the soil for the last couple of drops of oil. The man listened his own breathing echoing throughout his steel vest that weighs more than himself, while dust took over the dessert, and she, she longed for him. Children in the north and south of the country, died, and she waited in line, patiently.

After the war in Iraq, large companies had settled on oil fields, where an army of engineers -like himself- recruited from Turkey stayed in “housing” made of containers. When he called after sand storms, he would talk nice and easy so that she wouldn’t notice the fear and fatigue deep inside him. All those kids that died, aren’t you done yet? Why don’t you come back already… But she couldn’t pronounce such questions, she waited, stubbornly. She waited, inside her own system, gradually giving up every daily life activity. She watched the phone, the tv, the papers. Watched them with patience. As the fields spurted oil, a shiny black water leaked, of her. The dark liquor of solitude.

Hidden in the dessert

Hide in the dessert

Let the kids find you instead

Ever since the day she collected his pieces together, this loneliness that she adores keeps her straight. Like right now, she gets down from the mountains and finds refuge in islands. She tears the ads of books behind others and scatters them around. Seeing himself in pieces, triggers her oneness.

One unique minuscule in the dessert,

She drops her arms next to his.

The man salutes her with his head.

He would wave if he had arms.

She listens as the man disappears behind her.

She takes out her camera, stands up and turns her back to the sea. She lifts the camera up her head and shoots her face and body. Minutes ago pieces of her were captured, now she’s a whole in the frame. She takes the camera in her arms and lays on the shore. Her shadow leaves the shore. She crumbles, into the sand.