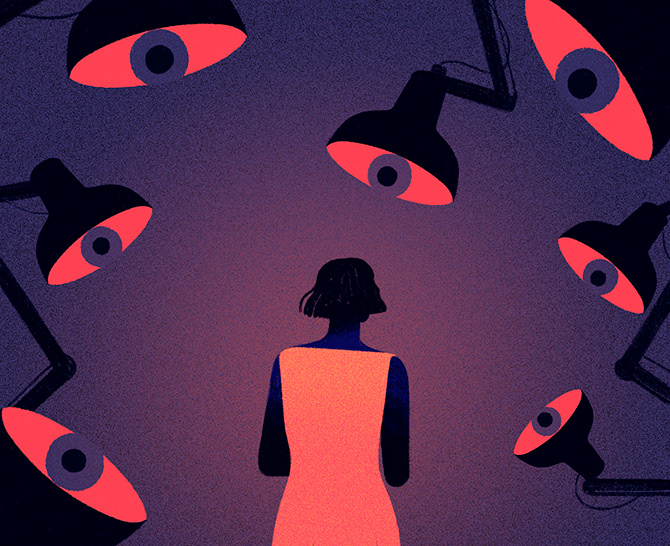 In August 2018, I wrote an exposure piece titled #MeTooTurkey: Bearing Witness to the Sexual Harassment and Oppression Dynamics of Turkey’s Literary Community”, which appeared on K24, the culture and art platform under T24, the news and media website that operates with the motto of being Turkey’s “independent internet journal”. I have been reflecting for a long time on starting the #MeToo movement in Turkey, in the publishing industry; and the article and the call from K24 editors who wanted to create a case on the movement got me take action. My goal was to tell my own story at first, then the story of ours, collectively, stepping outside of comfort zones. The article was telling the story, how an author was abused and what I witnessed; while drawing a framework for the sexism, sexual exploitation and tyranny in the publishing industry of Turkey, exposing persons without explicit reveal of their names. I, as a feminist, as a woman oppressed under the political power in Turkey, as a writer who published her fifth book despite all the harassment she received, sure was not “asking for more.” And I had begun my article with the following words: “I am proud to be starting this process that could potentially result in lynch, reprobation, insult and labelling.” They were all a probability before the article was published. After the article was published, I watched as each happened. While what I have been through for the months passed added up to my previous traumas, various events that occurred in our intelligentsia, and dominant actions toward emptying the #MeToo movement obligated me to write this article. Because, as a writer whose right to free speech is being impeded, and at this point I consider it is a vital necessity that I, as a soldier of the women’s movement that has started to echo throughout the world, tell about the tyranny I observe and am exposed to in my country to the world.

In this article, I will try to tell the consequences that followed the exposure piece as systematically as possible, and to draw a bigger picture about how the #MeToo movement is received in Turkey and the women’s empowerment is intended to being harmed by the current government, intelligentsia, patriarchal mentality and women who themselves lean their backs on patriarchy; and how we resist before all cruelty as a queer minority, through concrete and personal examples.

The article got published. The publishing industry shook, shivered, people began to talk, writers and pressers, poets and publishers and journalists and academicians talked. What can a queer feminist activist face as a consequence like me?

–          Her words were twisted: It has been said that she wrote the article to promote herself.

–          She heard silence: People who said they were with her during and after the writing of the article were dead silent after the article got published.

–          She was left alone (ostracized): People who gave her motivation, who were psyched to contribute left her alone afterwards. K24, around the time did not even respond to her editors’ emails.

–          She was labelled: The most common description of her is “fascist feminist”. Oh, and there is the “dumb feminist”.

Now, I want you to picture this: Turkey’s academia, writers, journalists are in agony. The culture and art platform –K24- under an independent internet journal finances itself through funds they receive from the European Union or institutions from various European countries, is one of the few pillars that try to support the culture of our beautiful, and lonely Turkey, where culture and intellect are already being forced to die off by the political power. In this status quo, following the trend will provide the necessary prestige for the platform, both in-land and outside of the country, for funding capacities. Putting together a case on the #MeToo movement that blasted in Hollywood, will make the strong women of Turkey shine, and may be start off a dissuasive wave in a country where almost five women are killed every day. It sure will not be difficult to unite a writer who has already expressed through her social media accounts that she intended to act by some way about the movement –me – and feminist women. The #MeToo case goes out with the editor’s introduction, and the title “Yen içinde #MeToo” (The #MeToo Among Us in Eng.) The publishing industry is shocked. Writers are mocked, people tweet, criticisms are thrown, and it has become gossip material within friend groups.

The catch is; as I penned the piece “Sexual harassment and tyranny in Turkey’s publishing industry”, declared that I would tell my own harassment history open heartedly to the editors of K24, and consulted yet again those editors when I had trouble foreseeing the legal enforcement part of the revealing or not revealing of the names of the persons and institutions that harassed me, during the email and phone call traffic that lasted for days and on. In the end we agreed on the strategy of exposing the harassers without giving out their names but through descriptions and depictions of the person’s positions in society and work environments. At this point, the editors were of course well aware of the full names of the people responsible in all the incidents I exposed in the article. As a matter of fact, the editors were able to tell who the harassers were even without the names.

Let’s to the part where thing became derogatory for me. K24 opened up a venue called “Kıraathane” in October 2018. The “About us” section of the venue reads: “Our Kıraathane is a place for reading before all. A place to listen to one another. To look, to see together, to see different things in that same thing we look at, to appreciate that difference (…) a place to awaken, to be shaken, to heal.” And there it was. The three months season schedule of the Istanbul House of Literature was slammed on the table. What I saw was the name of the editor/poet, also the leading actor of one of the tyranny and harassment cases I told in my article that had gotten published two months ago, staring at me from two whole programs. One is a reading of his upcoming poetry book, the other is a panel with other male poets.

Until here, I merely wrote the facts, and I will not comment about the specifics of this event in order not to subjectivize the situation.

It is clear that messing with traumas, motivating people to speak up, then ignoring and leaving them alone is quite “normal” when it comes to acquire funds or catch up with the international agenda. Although the platform holds a hard stance with the courage to join the #MeToo movement, this sort of actions and approaches harm both the movement and the subalterns. 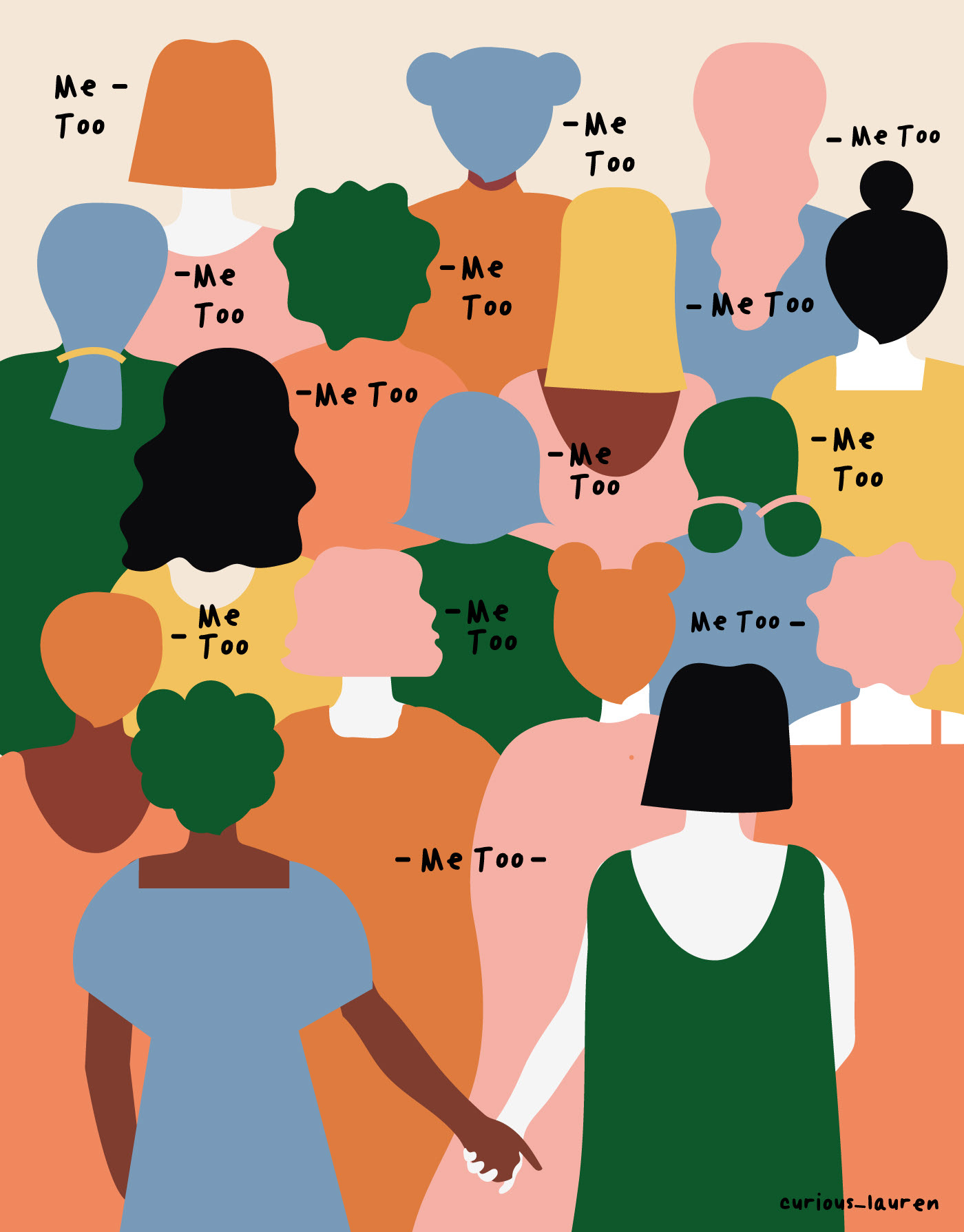 In the “harassment analysis” chapter of my article I keep referring to, I had drawn a table with the hypothesis that schematizing the phases of being harassed in the publishing industry (the industries may of course be varied) and its probable outcomes in order to visualize it might be useful. A reminder of that table will of use here too: 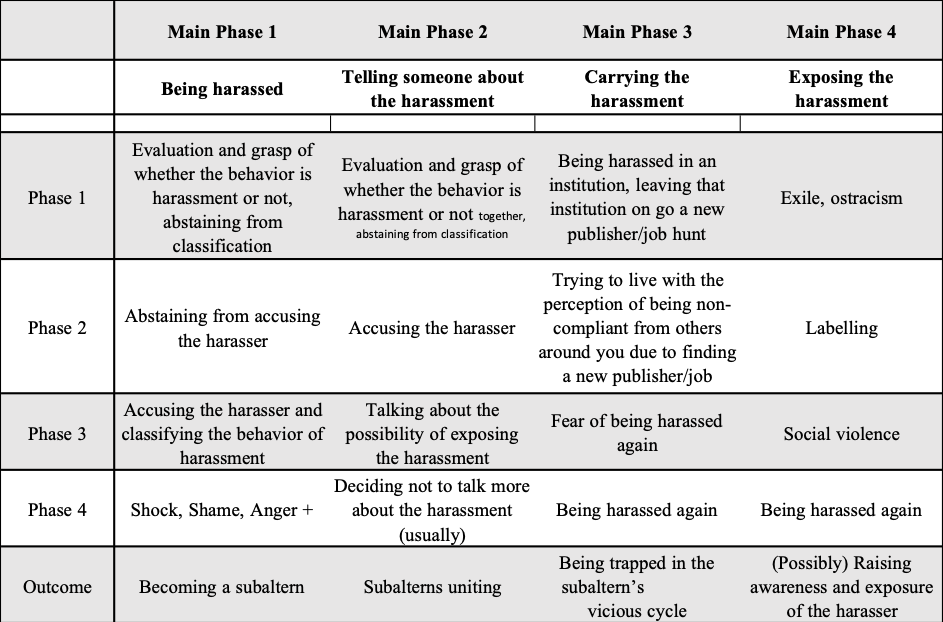 Experiencing what I tried to demonstrate in the table was interesting, and in fact pushed me to think about what my table lacked. Turns out I had used very few “being harassed again” boxes, very optimistically. But lucky me; because after the article was published the re-harassment took place so many times that each phase I counted above multiplied, ruining my table.

It is how it is, you build up your courage, either face your traumas or prepare to face your traumas in writing, you leave a publishing house, you slap the editor/publisher/poet/production director that reaches to touch your leg, and go out to the street feeling so proud. Let me give you a secret: Do this in Turkey, and that pride will be deflated in a minute. Because here, in Turkey where patriarchy is dense and overfed with political rhetoric multiple times a day; your pride is defying anything “male” there is (a person, a position, an institution this may be) and you, already with your life style, (your outfit with cleavage, flirtatious attitude, freedom seeking approach, sex life etc.) in capitals, DESERVED being harassed. I am aware that this sometimes may be the case for the U.S. too, and you may suggest that it is due to social gender norms beyond nations. And you would be right to some degree. Yet, when one grows up with the problematic boundaries of the Islam religion to the bone, they need to bring new perspectives into all norms and roles.

The increasing oppression of the political power over women (three children minimum, no abortions, no relationships without marriage, be the woman of your house, do not laugh, do not show your belly if you are pregnant) the fact that punishment for the murder of women is not dissuasive, and that rapes to children are being covered up keep crushing us. When this is the case, what is expected of the writer, academician, and journalist women? Sticking together maybe? Or supporting one another and being the voice of a victim alongside her? Together and firm, stand against both the government, and the cisgender natrans heterosexual men in intelligentsia?

If you are a female intellectual from Turkey, your answer to the questions above will be “Yeah, I wish”.

Because (Aside from cisgender natrans male intellectuals from Turkey):

–          Most of intellectual women from Turkey feed on the current patriarchal order, are a part of the system and are masculinized, therefore will not stand with the subaltern.

–          Poet, when a female author is disrespected by a male, which unfortunately occurs often, taps his back supports, saying “nicely done, she is torn”.

–          The prizing mechanism operates solely with the jury composed of the men and women that establish patriarchy, and for the authors “only they like”. This is also the case in literary dynamics such as criticisms, column distribution in journals and newspapers, and interviews…

–          Intellectual men do not accept criticisms, women certainly do not. A critic will excommunicate you.

I have tried to tell what can come out of the patriarchal, masculine, and harassment-supporting structure of the publishing industry in Turkey. I am not sure if we can teach feminism to women who set their network well, established their interests, built the strategic map of their careers directly on patriarchy, do not want to see the harassment taking place, have not had the “click” yet, or do not want the click, do not need the click, ignore and keep quiet about the harassments they witnessed; who are inclined to ease what happened by making gossip material out what they see or are told, meaning women who embraced the “manly” act. As a feminist who gave up hope from men, and ostracized from the community, I will continue saying, with capitals, this: Within the publishing industry, there is harassment, there is rape, and there is all kind of violence.

I am here, we are here, and we do not accept being harassed and bullied. Get used to it.